As you see, the word itself refers to three angles - a reference to triangles.

Trigonometry is primarily a branch of mathematics that deals with triangles, mostly right triangles. In particular the ratios and relationships between the triangle's sides and angles. It has two main ways of being used:

In its geometry application, it is mainly used to solve triangles, usually right triangles. That is, given some angles and side lengths, we can find some or all the others.

For example, in the figure below, knowing the height of the tree and the angle made when we look up at its top, we can calculate how far away it is (CB). (Using our full toolbox, we can actually calculate all three sides and all three angles of the right triangle ABC). 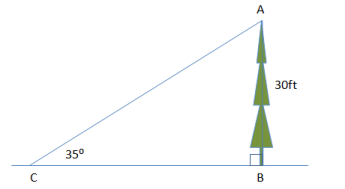 In a more advanced use, the trigonometric ratios such as as Sine and Tangent, are used as functions in equations and are manipulated using algebra. In this way, it has many engineering applications such as electronic circuits and mechanical engineering. In this analytical application, it deals with angles drawn on a coordinate plane, and can be used to analyze things like motion and waves.

For example, a radio or sound wave can be described by an equation such as

y = sin(ax+b)
and when graphed might look something like the wave below. The values of a,b and c determine the wave's amplitude, frequency and phase shift.