Algorithm to find the area of a polygon

If you know the coordinates of the vertices of a polygon, this algorithm can be used to find the area.

The algorithm, in JavaScript:

The algorithm assumes the usual mathematical convention that positive y points upwards. In computer systems where positive y is downwards (most of them) the easiest thing to do is list the vertices counter-clockwise using the "positive y down" coordinates. The two effects then cancel out to produce a positive area. 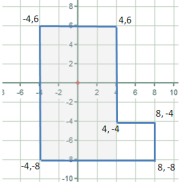 The following JavaScript code will find the area of the figure above. It will output "Area=128" which by inspection matches the figure.

Consider one side of the polygon. The formula is based on taking the area to the left of the chosen side, all the way to the Y-axis. That area is shaded grey in this illustration.

That area is equal to the area of the grey rectangle in this picture. (You can make the area a rectangle by removing a triangular piece from the bottom right and putting it at the top left.) So, the grey area is easily calculated as (X0 + X1) / 2 (the rectangle's width) times (Y0 - Y1) (the rectangle's height).

This area is what we are adding to the accumulation variable area each time through the loop - but the /2 is moved to the end of the function for purposes of efficiency.

Going down one side of the polygon adds all the grey area shown here.

Then going up the other side of the polygon subtracts all the yellow area shown here, because when a side is going up, Y0-Y1 is a negative number. The area that wasn't subtracted (grey) is the area of the polygon.

You don't have to start at the top of the polygon. You can start anywhere, go all the way around, and the numbers will still add up to the same value.

Also, it doesn't matter whether some or all of the polygon's corners are in the negative-X space, negative-Y space, or both, the result is still the same.

What if the polygon is something unusual like this?

Now look at just one strip. The right-most segment (red) adds the grey area to the total...

...then the next segment removes the yellow area...

...then the next segment adds the blue area...

...then the next segment removes the yellow area.

Only the grey area (in this illustration) remains in the total, and it's clearly the polygon's area within this strip.

There are circumstances where the algorithm will produce the wrong or unexpected results. They all have to do with self-crossing polygons where one side crosses over another side of the same polygon. It is not surprising that this happens - almost all the theorems about polygons also fail with self-intersecting polygons.

If the polygon crosses over itself (i.e. is not "simple") the algorithm will fail.

A polygon can be self-crossing, yet still traced entirely clockwise. In that case, the area is all positive, but the overlap area (blue) counts twice.

In this example, the area returned would be: (grey + 2*blue). A triple-overlap would result in tripling of the overlap area, etc. The result will be too large.

If the polygon has a 'twist' , such that part of the polygon has positive area and part has negative area, and those two areas overlap, then the overlap area cancels out and does not count toward the total area at all. In this example, the function returns (grey - red), which will be too low.

Thanks to Darel Rex Finley for permission to reproduce this entry.